Day 5, Task 3, and the first launch. A tough day for the Contest Director...to launch or not to launch - that was the question for the afternoon. A sniffer sniffed, and found just a hint of something happening, so the decision was "go". The first two away found nothing, so the launch was stopped. Then they found another hint or two, so the launch was started again, and it was great to be actually underway. There were of course landbacks, landouts and engine starts, but for those who had decided...
Read more...

Some days are just not contest days, and today is one of those. Again. I thought Skysight had gone to black and white. A brave few had a fly around the area yesterday....... it's been a while since Taupo Airport had a visit from a glider, but it was a good reminder that there are other aircraft types around, and they were very helpful! The Pawnee enjoyed the sealed runway for the retrieve! Looking forward to Bill and Mary's roast dinner tonight and a better day tomorrow.
Read more...

Groundhog day. Same blue sky, same hint of wave just out of reach. Some sniffers were sent sniffing, but were soon back. Very frustrating, but hey - that's gliding!
Read more...

Uh-Oh. Willie Nelson's still here. The only positive is that he's been joined by the Beach Boys, and there are waves, so some of the brave boys as listed yesterday may try a bit of surfing later on in the day. In the meantime the Contest Director has declared a "Free Fly" day. The free fly shown is available to be picked up at the Taupo Gliding Club. Tim the weather man has promised an improvement as the week wears on, so we live in hope.
Read more...

Willie Nelson would have loved today....."Blue Skies - shining on me - nothing but Blue Skies. do I see!" Not many of us loved it quite so much. Today stayed blue except for a bit of a convergence far in the distance, on the other side of a big blue hole, So today was for the eclectic, the electric, the empowered and the intrepid. The rest of us mere mortals continued to refine our preparations for the catered dinner tonight and the brillianr days ahead. Yipee.
Read more...

A brilliant day forecast,but a disappointing sky,almost totally bluer. However everyone had a fly,even if it was just around Mt.Tsuhara which was workinh well in the strong westly breeze! Systems were checked and tested, appetities were wetted, so it's all go for Day 1. Bring it on!
Read more... 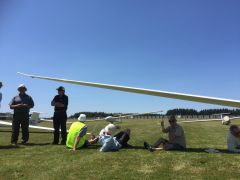 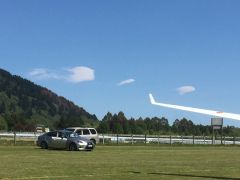 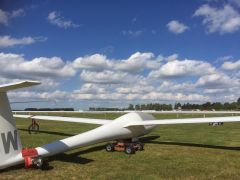