The Calendar for the 17th FAI EGC "Vinon 2013" remains the same as mentionned in the IGC website :

Bulletin n° 1 will be published soon

To all foreign pilots The French Gliding Federation (F.F.V.V.) has made the decision to make FLARM (or any compatible equipment) mandatory from the season 2013 everywhere in France (not only in the Alps, and not only in competition). Reference Document (french) : Here  -  English version (by Steve Thompson, Vinon) :  Here
Read more...

10 h 30 : the competition day is cancelled NO GRID FOR THE MOMENT Decision will be made at the Briefing 10 h 30
Read more...

Weather conditions are not so good than expected. We are moving to alternate Tasks for all classes Task duration reduced down 1 h 30 and Turnpoint areas revised
Read more... 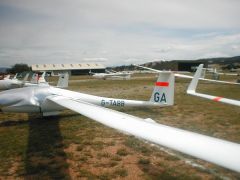